As our blog reply system failed to work for most people who tried to make comments our emails are listed below for all those that may be interested in keeping in contact.

We would also like to take this opportunity to thank everyone who helped us on our trip, of which there were many including those that inspired us to undertake the journey in the first place.

It is the people you meet on your journey that make travelling so memorable & restore your faith in human kind.

Thanks again to everybody & if you are contemplating a trip of this kind 'just do it'.
Posted by Bob Denman at 19:59 No comments:

Just seven weeks after our return to the UK it was a sudden & totally unexpected shock to learn that our fellow travel companion Dave Walker collapsed & died while out jogging near his home on the 15th May.

Dave was always smiling, a true friend & a great travel companion who towards the end of our 11 month trip was looking forward to being re-united with the love of his life Anne.

Dave will be greatly missed by everybody that knew him as well as his friends & family including the 2 grandchildren born in January whilst he was in Santiago, Chile.

We met many fellow travellers during our trip & I’m sure that you all remember Dave, his journey will now continue in all of our thoughts. 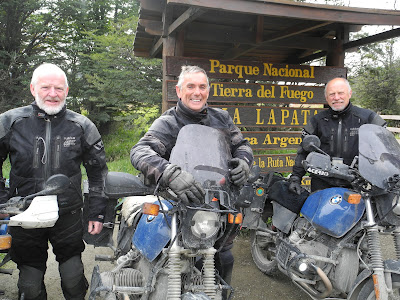 Dave in the centre with Bob & myself at the end of the road ‘Tierra del Fuego’
Posted by Terry at 22:45 1 comment: 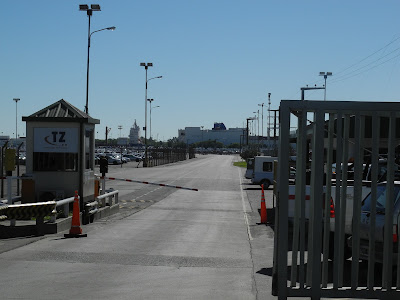 Yes, you read it correctly the return trip from Zarate to Tilbury, London is 29 days! for Bob & Dave it was even longer at 33 days & my embarkation delay has saved me 4 days on board!!
This is the entrance to Zerate port with the vessel ‘Grande San Paolo’ our home for the next month in the distance, I’ve finally made it & meet up with the other boys. 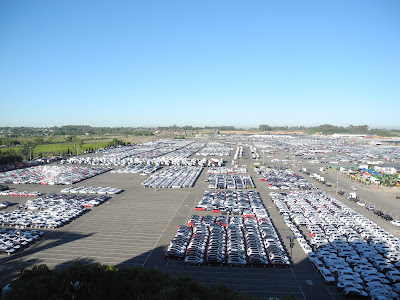 Zarate is a major port for transport of vehicles between Argentina & the world, you can see them all lined up on the dock, in Argentina you can only Import goods to the value of your Exports so major manufactures have to open factories in the country. 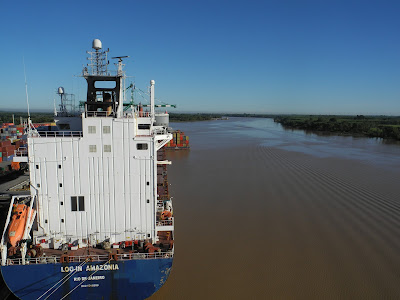 I ask Bob & Dave if life on board is good? unfortunately the reply is the opposite as the standard of the ship & the food already has the thumbs down.
This journey is a necessity rather than a pleasure so fellow travellers note, the quality of Grimaldi Lines vessels is not the greatest although you do get a different view of the countryside. 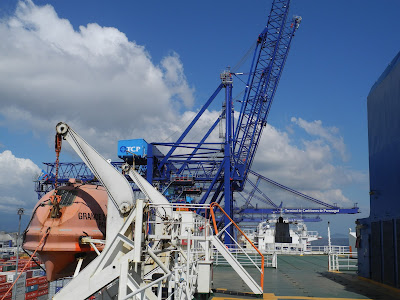 Our next stop is Paranagua in Brazil & then Santos the port close to Sao Paulo, shipping containers & cranes everywhere with all the ports similarly equipped.
A brief trip ashore is also made to stock up on some Chocolate to make the trip a little more bearable. 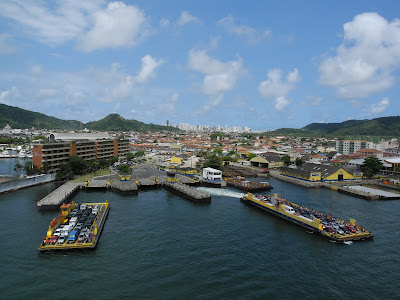 Santos is a large city with many ferries crossing the estuary, if you look at Google Earth however compared to Sao Paulo it’s tiny. 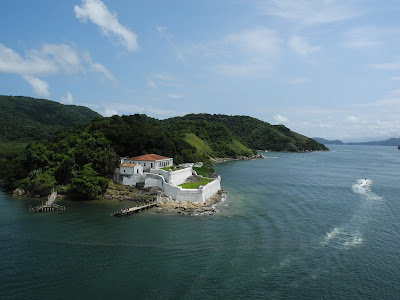 The coast of Brazil is littered with small lush green islands, some like this one have Beach resorts & old fortifications. 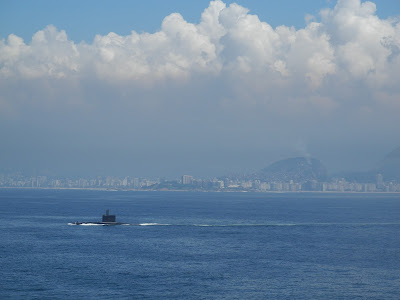 Entering our last port in South America at Rio we run to man the 'depth charges' in case this sub is transporting drugs, we can’t find any & we let it pass unscathed. Rio de Janeiro as you can see suffers from a bit of smog, not a total surprise as 6.3 million people live here. 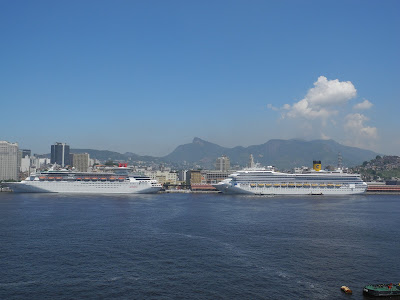 I’ve never suffered from ‘Ship envy’ but I would sure like to be on one of these cruise liners, at least they have things to do rather than our limited repertoire of films on the laptop & books, at least the company from our fellow Swiss, French & Canadian guests is good. 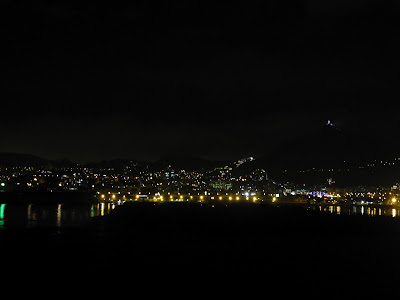 Rio at night with ‘Christ the Redeemer’ illuminated in the distance, we did intend to get off the ship here but the traffic was so bad outside the port that we turned round & came back, we only had a few hours & we are off to Africa in the morning so it wasn't worth the hassle. 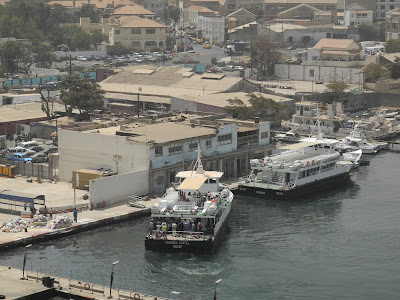 7 days later we reach Africa & dock at Dakar, Senegal, once again it’s very hazy but this time due to dust with everything covered in a thick layer, no chance to leave the ship here but I did manage to get a WiFi connection from the shore.
This was a bit of luck as when I checked my bank account someone had withdrawn £600 from ATM’s in Lima while I was crossing the Atlantic, Dave was also done so we both spent some time on the phone to N&P who were great & refunded the money straight away, at the time it also looked like Bob was OK. 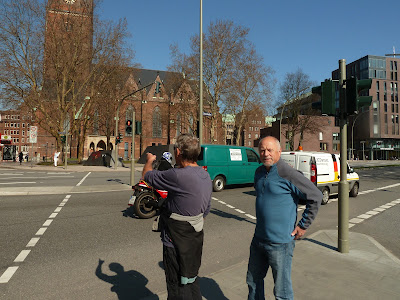 The temperature in Dakar was 43 degrees C & now 9 days later it’s nice to be back in the cooler climate of Hamburg, you do appreciate the order & calm of Europe when you have been away for a long time.
Bob tried to get some money from an ATM, he was refused & it turned out his card had also been cloned, thankfully this only happened on our way home. 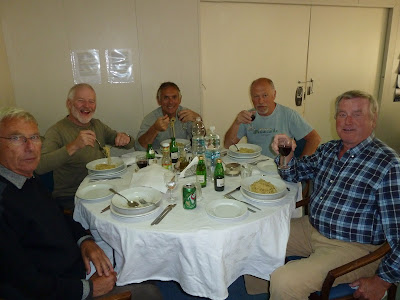 In Germany we pick up a new chef & although we only have a few days of his cooking it is significantly better than we have been used to, here we are celebrating our imminent return to Tilbury with Bruno & Don who actually chose this trip as a Holiday!! 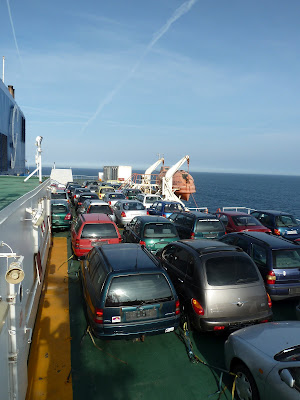 If you ever wondered where all the old cars from Germany & the UK go here is your answer, the ship is loaded at both ports with anything that can be driven prior to it’s return trip to Africa. 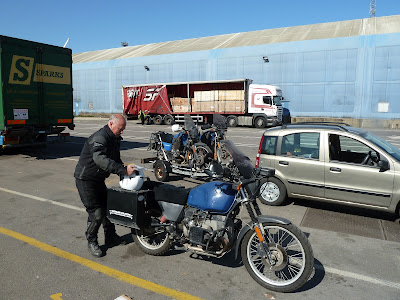 Well we made it!! It’s a shame we have to return tomorrow to pick up the bikes due to Customs being closed on Sunday but it was a real treat to receive a great reception from about a dozen BMW club members at the docks.

It’s great to be on the road but it’s also good to be home & see the loved ones we missed!! Time to start planning the next tour?

To Catch the Ship 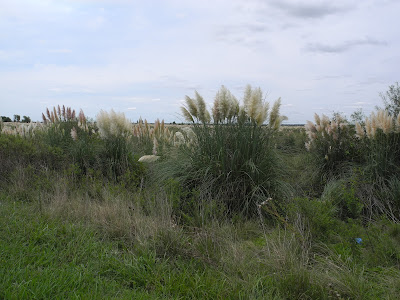 Zarate is only 90km along the River Plate from Buenos Aries but it will take Bob & Dave on the ship 4 days due to the high cost of remaining docked in BA & the availability of a berth at Zerate.
My ride from BA only took a couple of hours through a very uninteresting landscape, for hundreds of km’s towards Paraguay lies a huge area of pampas but at least I discovered where Elephant grass comes from. 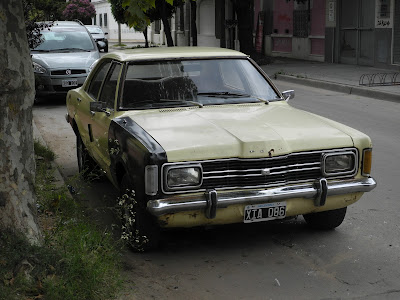 The town of Zerate once again highlights the way the Argentinians keep their old cars on the road, spotting these old vehicles keeps me amused as the boarding is delayed again until Sunday, you don’t see many Cortina Mk3’s in regular use here in the UK! 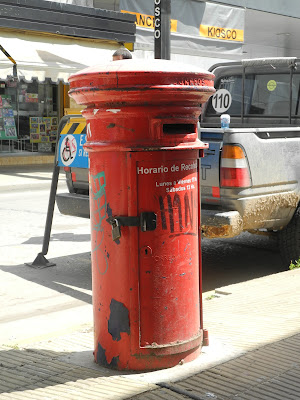 The infrastructure around BA was constructed by the British with a good example being the Post boxes, a local mod to the lock keeps it going.
Posted by Terry at 00:04 No comments: 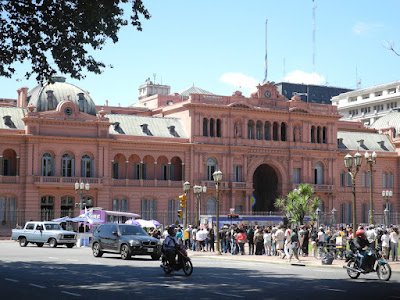 Well as you can probably gather Bob and Dave are safely on the ship home & I’m back in BA as the Wednesday boarding did not happen with the vessel departing around 08.30, I have one more chance on Saturday at Zarate otherwise it’s the next sailing on 11th March.

To at least improve the situation Roger has turned up & we can explore the City together, this Pink building is where Evita used to speak to her adoring subjects & sometimes gave money away as a gift from the state, it looks like Christina the current President is following in her footsteps as the queue of people you can see is for free bus passes available for a limited time, this is one way to ensure you remain popular. 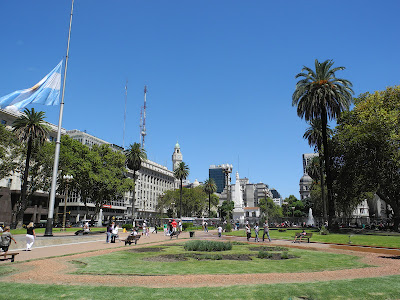 On a more tragic note you can see that all the flags are at half mask, the city is in 2 days of mourning for the 50 people killed in a train crash early yesterday at a downtown station, initial report have said that there have been concerns over the trains breaking system for years, another preventable disaster? 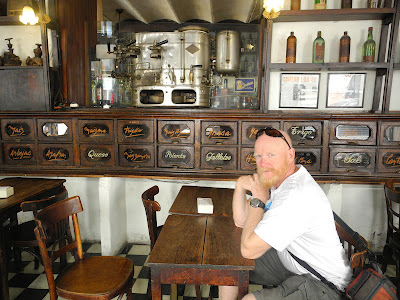 Avoiding Starbucks we walk to the San Telmo district of the city with a coffee at the famous Bar Plaza Dorrego, the old coffee machine may no longer be working but the atmosphere & graffiti carved into the dark wooden furniture is from a bygone age, the food is great too. 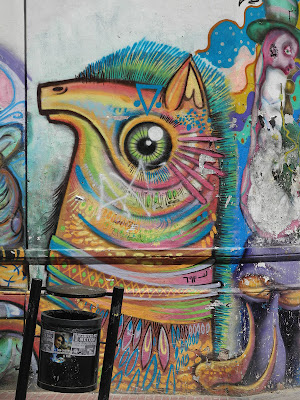 This is an antique & artist inhabeted section of the city where the famous market is held on Sundays, the colourful buildings certainly make it an attractive area to stroll around.

Notice a picture of Christina on the bin, she is certainly popular at the moment. 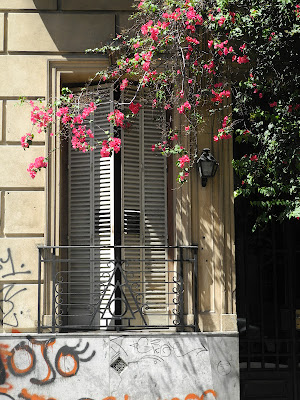 Typical European design of window with shutters found all over BA. 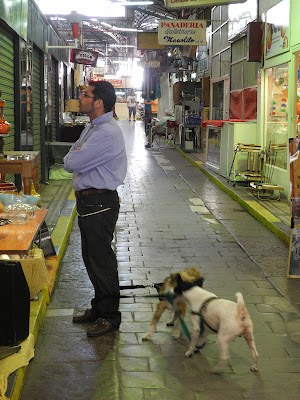 An enclosed market in San Telmo, this one is a little unusual as it sells antiques, clothing & souvenirs as well as meat & vegetables, does this guy know what his dogs are up to? 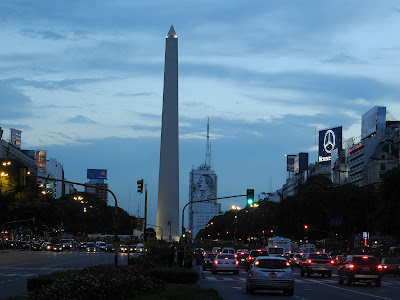 A shot at dusk of the ‘Obilisco’ with Evita on the building in the background, this was once covered in a giant condom for AIDS awareness day, the locals however liked it so much it remained for a week instead of the planned one day. 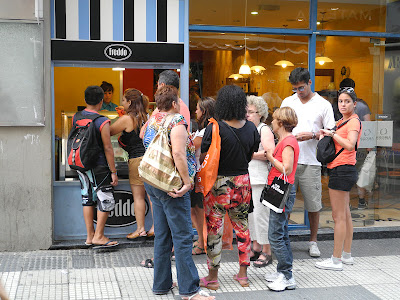 This is a common site throughout South America, they just love ice cream & even the smallest towns have several shops, check with Bob & Dave it’s pretty good with an extensive range of flavours. 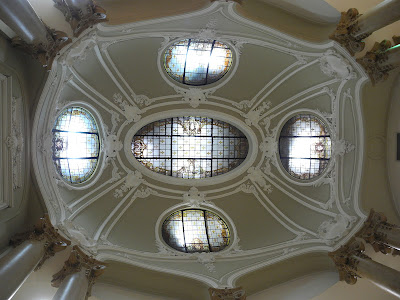 How’s this for a ceiling in a Burger King restaurant, how the authorities managed to let them adapt a palace into a burger joint I don’t know but at least they insisted they keep all the interior features!!

Once again I hope this will be the last entry with embarkation on Saturday, but you never know?
Posted by Terry at 21:43 2 comments: